Relations between Iran and France worsen over Charlie Hebdo cartoons 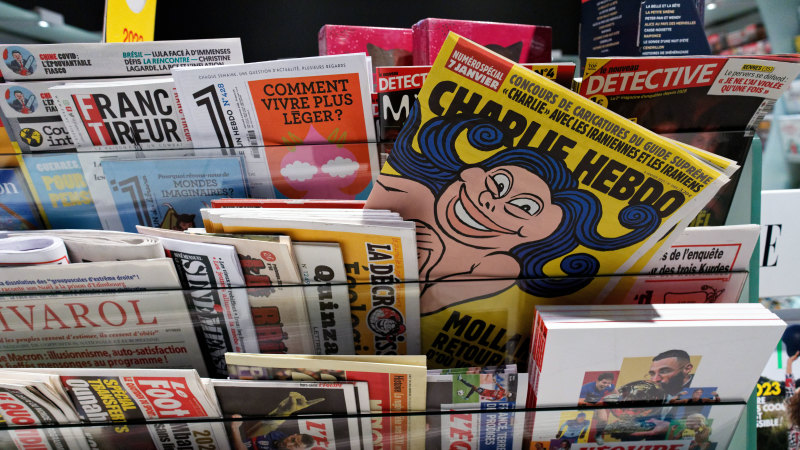 On Friday (AEDT), there was a heavy security presence around the institute and the nearby French embassy in central Tehran. Graffiti left on the outer walls – apparently by government supporters – referred to France as “the home of homosexuals” and a “place of blasphemy”.

Charlie Hebdo has a long history of publishing vulgar cartoons mocking Islamists, which critics say are deeply insulting to Muslims. In the 2015 attack, two French-born al-Qaeda extremists attacked the newspaper’s office, killing 12 cartoonists, and it has been the target of other attacks over the years.

Its latest issue features the winners of a recent cartoon contest in which entrants were asked to draw the most offensive caricatures of Supreme Leader Ayatollah Ali Khamenei.

One of the finalists depicts a turbaned cleric reaching for a hangman’s noose as he drowns in blood, while another shows Khamenei clinging to a giant throne above the raised fists of protesters. Others depict more vulgar and sexually explicit scenes.

Iran “is not only practising violence against its own people but is also practising a policy of keeping people hostage, which is particularly shocking,” she said on LCI television.

“In France, not only does freedom of the press exist – unlike what happens in Iran – it is also exercised under the control of judges and an independent justice system, which is something that Iran undoubtedly knows little about. Also in French law we do not have the notion of blasphemy.”

She did not respond directly to the ambassador being summoned or expressly defend Charlie Hebdo. The French government, while defending free speech, has rebuked the privately owned magazine in the past for fanning tensions.

Iran has been gripped by nationwide protests for nearly four months following the death in mid-September of Mahsa Amini, a 22-year-old woman who had been detained by the morality police for violating the country’s strict Islamic dress code.

Women have taken the lead in the protests, with many stripping off the compulsory Islamic headscarf in public. The protesters have called for the overthrow of the ruling clerics in one of the biggest challenges to their rule since the 1979 Islamic Revolution that brought them to power.

Charlie Hebdo, which has published similarly offensive cartoons about dead child migrants, virus victims, neo-Nazis, popes, Jewish leaders and other public figures, presents itself as an advocate for democracy and free expression. But it routinely pushes the limits of French hate speech laws with often sexually explicit caricatures that target nearly everyone.

The paper drew fire for reprinting caricatures of Islam’s Prophet Muhammad that were originally published by a Danish magazine in 2005. Those cartoons were seen as sacrilegious and deeply hurtful to Muslims worldwide. Islamist groups around the world organised demonstrations, many of which turned violent, as well as boycotts of Danish products.

Epiphany celebrated in Greece after 2 years of restrictions

Mom convicted of killing her infant twins in Missouri

Russia, climate, inflation: Are we headed toward a “polycrisis”? The buzzword at Davos, explained.