Putin cannot be trusted on negotiations 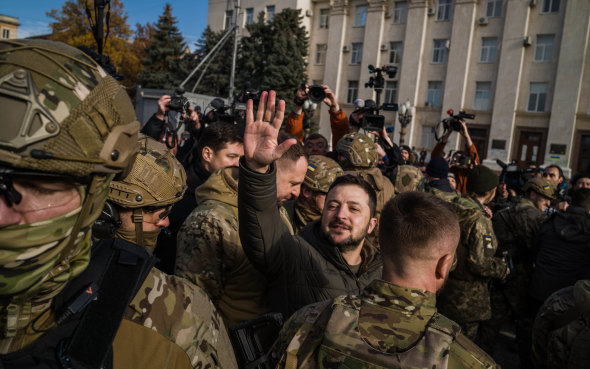 A ceasefire along the current front line would leave Putin in control of conquered territory in Ukraine. This would be a fundamental breach of the United Nations Charter, which would set a bad precedent for other potential aggressors.

Talking to Putin is useless in any case because he cannot be trusted. He has recently talked about being open to negotiating, but this is a sign of desperation rather than a serious offer of an olive branch.

While Putin talks about negotiating, he showed his real agenda this week with the Russian airstrikes that killed 10 innocent people in the southern city of Kherson.

Most importantly, a decisive victory for Ukraine is still very possible. The mud will eventually dry out or freeze, and the campaigning season will restart.

Providing they have the weapons, Ukrainians, incredibly, still seem to be as determined as ever to drive Russian troops from their soil. They have shown they are more motivated to fight than the raw conscripts and paid mercenaries, including freed convicts, on whom Putin increasingly relies.

Putin’s last hope was that he could blackmail or bribe the West into abandoning Ukraine. But he seems to have failed.

Putin was counting on isolationist US Republicans to stop the flow of arms to Ukraine but after Ukrainian president Volodymyr Zelensky flew to Washington last week, the US Congress overwhelmingly approved an additional $US45 billion ($67 billion) in military aid to Ukraine. The US also finally agreed to supply Patriot anti-aircraft missiles which Ukraine has been demanding since the start of the war.

The war has dragged on far too long and Ukraine is suffering, but Australia must stand with its allies and continue our support until Putin caves in.