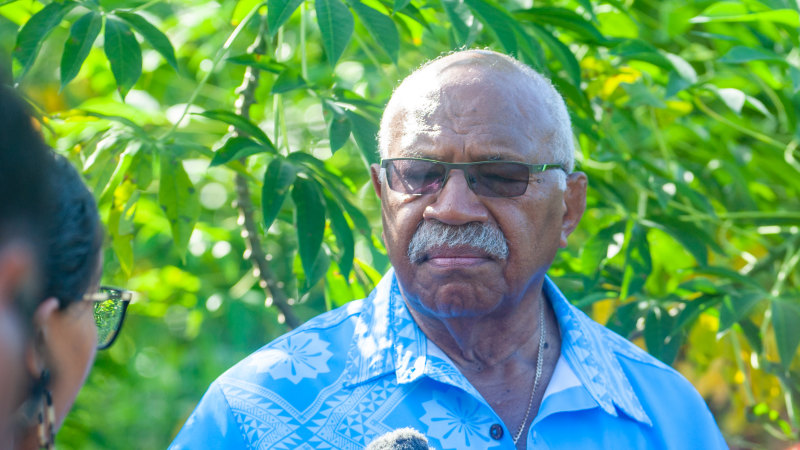 People’s Alliance and Prime Minister Frank Bainimarama’s FijiFirst party are now neck and neck in the polls, both sitting on 38 per cent with more than a quarter of polling stations counted.

People’s Alliance’s vote dropped steadily from over 50 per cent in each tally update throughout Friday, with FijiFirst clawing back ground from 22 per cent.

The National Federation Party has seven per cent of the vote while the Social Democratic Liberal Party has six.

The other five political parties remain below the five per cent threshold of votes required to qualify for a seat in the expanded 55-member parliament.

Bainimarama – who came to power after instigating a coup in 2006 – has a personal vote of 26 per cent in Fiji’s single constituency while Rabuka is sitting at 14 per cent.

A final tally is due on Sunday.

Despite being ahead in the polls before Friday’s final update, Rabuka doubled down on claims of voting data irregularities and petitioned the Fijian public to register their concerns about electoral integrity.

Rabuka also wanted the military to use its powers under the constitution to oversee a fair ballot count after alleging voting irregularities.

Major General Jone Kalouniwai declined to get involved, saying using the military in the electoral process would be unconstitutional and he maintained faith in the system.

“I wish to reassure the people of Fiji that the RFMF (Republic of Fiji Military Forces) will not respond to Rabuka’s insistence or any political party,” Maj Gen Kalouniwai told Radio NZ.

Opposition parties had raised concerns over the preliminary count after results changed dramatically when the election’s app was taken offline due to a glitch.

People’s Alliance had been ahead of FijiFirst but this swapped when the app came back online after a number of hours on Wednesday, election night.

The supervisor of elections, Mohammed Saneem, said votes had been mismatched to candidates when they were uploaded to the results app, causing some candidates to show unusually high numbers.

But Saneem said there was no problem with the database as ballots are manually counted and verified.

He said while the app was down, a substantial number of polling stations reported their results which is what updated the overall tally.

Rabuka and three other opposition party leaders say they can’t trust the information published on the app and questioned the integrity of the data transfer from the manual count to being posted online.

All declined to express faith in the Fijian Elections Office.

The Multinational Observer Group says it has not observed “any significant irregularities or issues during pre-polling, postal voting or election day voting”.

Co-chair and Australian MP Rebekha Sharkie said vote counting speed had slowed after additional safeguards were put in place after the glitch.

She expressed confidence in the ballot counting process when asked if there was any evidence to substantiate the opposition’s claims.

The organisation’s interim report noted the app is not used to count votes but only to publish results.

This article was made possible through the Melbourne Press Club’s Michael Gordon Journalism Fellowship Program.

Hong Kongers in the U.S. get extended deportation protection