Italy on brink of history as it turns to a woman of the far right, Giorgia Meloni 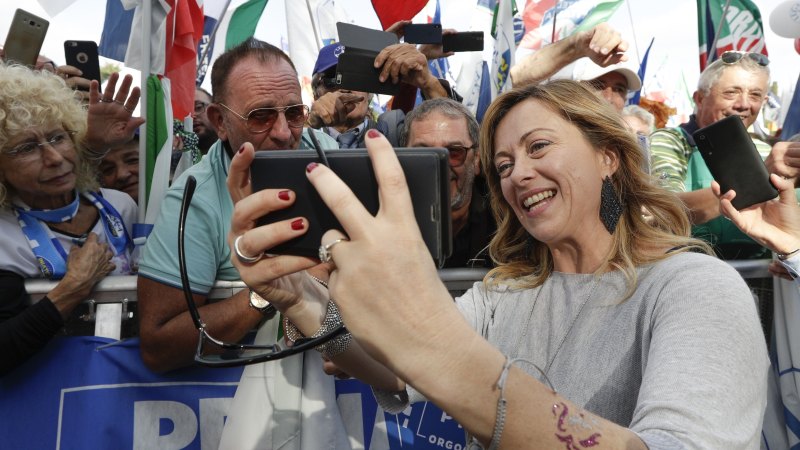 By contrast, their main opponents, the Democratic Party and the Five-Star Movement, remain bitterly divided, due to the role of the Five-Star Movement in bringing down Draghi’s government. If the two parties were allied, they would at least have a sporting chance. Separately, they are doomed.

Although she is only 45 years old, Meloni’s rise to the top has been a long time coming. While National Alliance were taking their place in government with Berlusconi in the mid-1990s, she was becoming leader of the party’s student movement, already a remarkable achievement for a woman in the misogynistic world of Italian politics generally, never mind that of the far right.

Elected as an MP in 2006 before she was 30, Meloni created Brothers of Italy with a handful of allies in 2012, and has been its leading figure ever since. As a viral video of her loudly proclaiming from the podium of a rally “I am Giorgia, I am a woman, I am a mother, I am Italian, I am Christian,” underlines, Meloni appeals to nationalist and conservative sentiments in Italian society.

While in 1996, she said of Mussolini that he was “a good politician, there has been no one like him in the last 50 years”, today Meloni disavows any link between her party and fascist legacies, stating in August this year that the Italian right consigned fascism to history decades ago. At the same time, a quick search throws up plenty of photos of Brothers of Italy members performing fascist salutes.

Especially given its place at the heart of the European Union, Italian democracy is unlikely to be in danger under a far-right government. But we can expect harsher rhetoric and measures on immigration and crime, along with opposition to greater rights for ethnic, religious, and sexual minorities.

What we do not expect, however, is a major shift towards support for Russia. Although both Salvini of the League and Berlusconi have long been friends of Putin, Meloni has been keen to stress Italy’s place in NATO and backs the continuing supply of weapons to Ukraine.

As a woman in the prime minister’s chair, Meloni will represent something new in Italy, albeit with echoes of the past. She has amply demonstrated her political skills but will soon face two enormous challenges: being a woman in charge of Italy, and a far-right politician leading a Western democracy at a time of economic and military crisis. Succeed, and she could rule Italy for a generation. Fail, and she too may be consigned to history.

US warns Russia of ‘catastrophic consequences’ if it uses nuclear weapons

In Lebanon, boat tragedy kills 94 but others plan to migrate

Father’s Day 2022: Gift ideas for all types of dad – National

UN court to rule on jurisdiction in Rohingya genocide case

‘It feels like we’re going back in time’: Abortion rights protests quickly materialize in Los Angeles