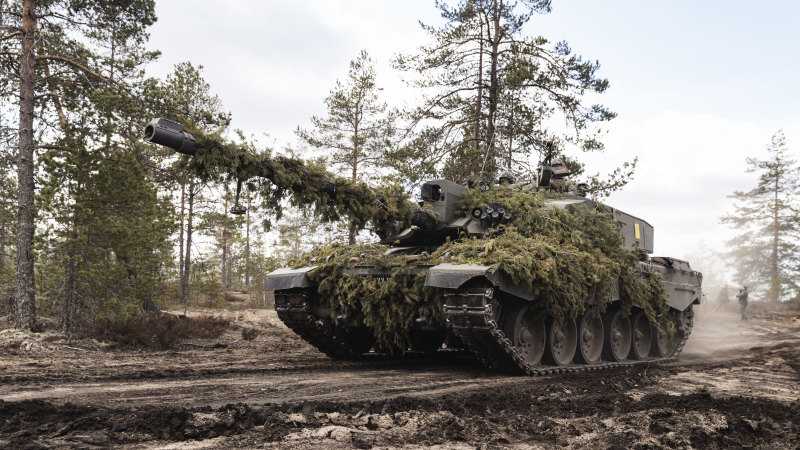 It is not only accelerating its own contribution but will embark on a major international diplomatic effort to coax allies into outlining greater support than that pledged in the war’s opening year.

The eleven-and-a-half metre Challenger 2 tanks are manned by four crew and carry a 120-millimetre main gun that can fire explosives and armour-piercing rounds. They also have two 7.62-millimetre machine guns and can travel at a top speed of 59 kilometres per hour.

They were used in Iraq. Britain is upgrading to Challenger 3 tanks. The tanks will be delivered to Ukraine in coming weeks, adding to the thousands of Ukrainian troops who have been trained on UK soil in the last six months.

Around 30 AS90s, which are large, self-propelled guns, operated by five gunners will then follow. Ukrainian forces will be trained on how to use the weapons in the UK over the next few days.

The Chair of the House of Commons Defence Committee Tobais Ellwood said the shipment was overdue.

“We are finally gifting the hardware Zelensky has been calling for and could break the impasse of this increasingly frozen conflict,” he told The Sydney Morning Herald and The Age.

“But a squadron of main battle tanks alone will make no material difference.

“Other NATO allies must also offer Main Battle Tanks if Ukraine is to have the hard power assets to break through Russia’s defences and counter a likely spring offensive,” he said.

Zelensky said the donation showed the support of the UK was “impenetrable”.

He said the tanks “will not only strengthen us on the battlefield” but would also “send the right signal to other partners”.

Zelensky’s comments are widely interpreted to refer to Germany which is under growing pressure from NATO and EU allies to allow the re-export of Leopold tanks to Ukraine.

He has been requesting tanks from allies since the war began, ahead of the one-year anniversary of Russian President Vladimir Putin’s invasion.

Several European nations, including Poland, have said they want to send Leopold battle tanks as part of building an international coalition in a significant gear shift in the West’s support for the defenders.

But because the Leopolds are made in Germany, Berlin has to approve their re-export from their original customer.

Ukraine has said it needs 300 tanks and 600 armoured fighting vehicles to make any difference. The UK’s donation is estimated to be around a dozen or so leaving Ukraine in need of the 2000-strong fleet of Leopold 2 tanks operated by European nations.

France has already said it will send its light tanks, the AMX-10s to Ukraine. Shortly after, the United States and Germany agreed to send infantry fighting vehicles.

The Russian embassy in the UK said the UK’s Challenger tanks would “hardly help the Ukrainian military turn the tide in the field”.

“Yet they will become legitimate large-scale targets for the Russian forces,” the embassy said in a statement.

Alcohol consumption on the decline for Gen Z, studies suggest