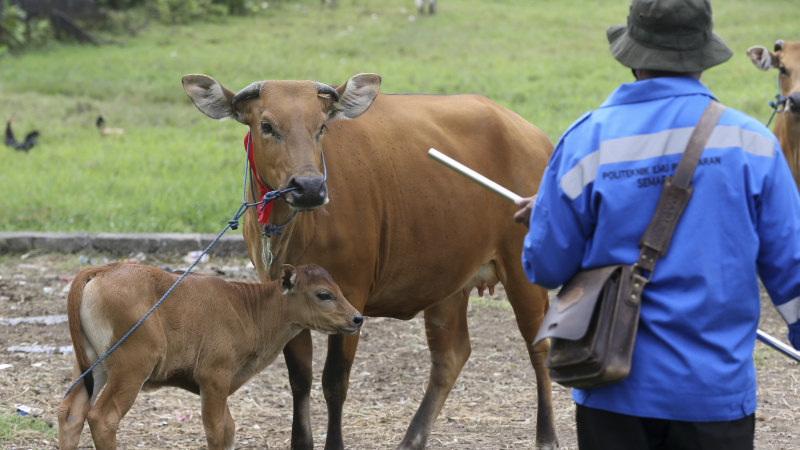 “It’s far too insidious a disease,” said Windsor, who is just back from Java, Indonesia’s most populous island, for talks about the crisis. Massive under-reporting was a major issue.

“Especially if there has been some slaughtering out, there might be a disincentive [for people] not to have their cattle slaughtered.

“I’d be surprised if they could remove it this quickly from Bali. The disease is so contagious. There may well be animals at the moment that are developing symptoms.”

Indonesia is attempting to vaccinate animals susceptible to the virus but amid a shortage of vaccines and personnel to administer them it has a huge battle on its hands.

There are more than 33 million head of livestock in the country, including 18 million cattle, according to its foot and mouth taskforce, and only 707,580 animals have been vaccinated during the outbreak.

The Australian government has resisted calls from the federal opposition to close the border with Indonesia to protect the countries’ bilateral and trade relationship.

It is a decision that has been well received in Jakarta.

Australia briefly banned live cattle exports to Indonesia in 2011 after the ABC’s Four Corners aired footage of animals being mistreated in Indonesian abattoirs.

A decade on and Marty Natalegawa, who was Indonesian foreign minister at the time, hopes open dialogue between governments on foot and mouth will continue.

“Given the seriousness of the threat and challenge, it is significant and important that both governments have reportedly been engaged in discussions to stop the outbreak in Indonesia and to prevent its spread to Australia,” he said.

“The FMD cases in Bali have not affected numbers of tourists coming,” he said. The government is taking the news very seriously. We are doing all the efforts to tackle the FMD cases.

“Bali is recovering [from the pandemic] and is very vulnerable to such news but thankfully it has not affected the international tourists’ arrival.”

Officially, there are 199,188 active foot and mouth cases across Indonesia and there have been 430,171 total infections.