America decided the pandemic is over. The coronavirus has other ideas 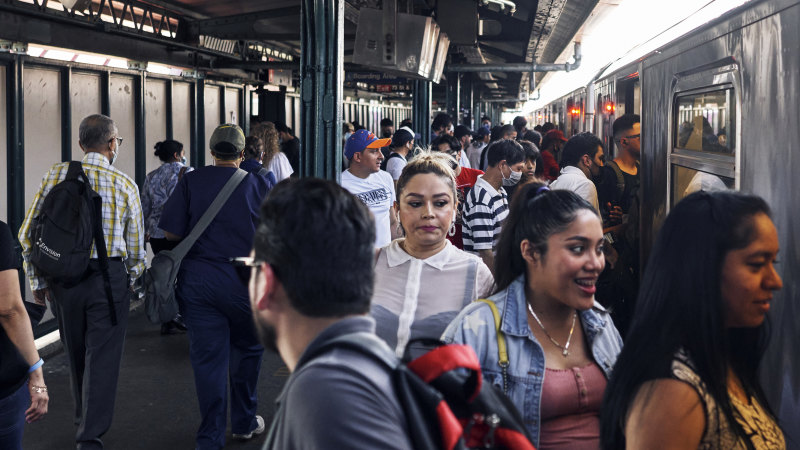 ‘Untrustworthy’: US bans Chinese technology from Huawei, others

Angela Rasmussen, a virologist at the University of Saskatchewan, would like to see more money for testing and vaccine development, as well as stronger messaging from the Biden administration and top health officials. She was dismayed recently on a trip to southern California, where she saw few people wearing masks in the airport. “This is what happens when you don’t have politicians and leaders taking a strong stand on this,” she said.

The CDC said it has urged people to monitor community transmission, “stay up to date on vaccines, and take appropriate precautions to protect themselves and others”.

Nearly one-third of the US population lives in counties rated as having “high” transmission levels by the CDC. Cases are rising especially in the South and West.

Many people now see the pandemic as part of the fabric of modern life rather than an urgent health emergency. Some of that is simply a widespread recalibration of risk. This is not the spring of 2020 anymore. Few people remain immunologically naive to the virus. They may still get infected, but the immune system – primed by vaccines or previous bouts with the virus – generally has deeper layers of defence that prevent severe disease.

But the death rate from COVID-19 is still much higher than the mortality from influenza or other contagious diseases. Officials have warned of a possible fall or winter wave – perhaps as many as 100 million infections in the United States – that could flood hospitals with COVID patients. Beyond the direct suffering of such a massive outbreak, there could be economic disruptions as tens of millions of people become too sick to work.

“It feels as though everyone has given up,” said Mercedes Carnethon, an epidemiologist at the Northwestern University Feinberg School of Medicine.

Carnethon said she also isn’t as cautious as she used to be. She wears a high-quality mask on airplanes, but doesn’t wear a mask at the gym. She is worried that she’ll contract COVID again – she caught it during the Omicron wave during the last American winter. But she doesn’t think a “zero COVID” strategy is plausible.

“I feel there is a very limited amount that I can do individually, short of stopping my life,” Carnethon said. “It’s risky. I’ll be catching COVID at an inconvenient time. I can hope it is milder than the first time I caught it.”

Many experts concerned about ongoing transmission have also pushed back against online fearmongering and apocalyptic warnings about the virus; people are not routinely getting infected every two or three weeks, Rasmussen said.

Population-level immunity is one reason the virus remains in mutational overdrive. The risk of reinfections has increased because newly emergent subvariants are better able to evade the front-line defence of the immune system, and there is essentially no effort at the community level to limit transmission.

Al-Aly, who is also chief of research and development at Veterans Affairs St Louis Health Care System, has scoured the VA’s vast database to see what happened to the nearly 39,000 patients infected with the coronavirus for a second or third time. What he found was sobering. In a paper posted online last month, but not yet peer-reviewed or published in a journal, Al-Aly and his co-authors reported that people with multiple infections have a higher cumulative risk of a severe illness or death.

It’s not that the later illnesses are worse than, or even as bad as, earlier cases. But any coronavirus infection carries risk, and the risk of a really bad outcome – a heart attack, for example – builds cumulatively, like a plaque, as infections multiply.

Vaccination remains an important, if still underused, weapon against the virus – even if it’s not that effective at stopping new infections.

Omicron blew through the largely vaccinated population last winter with stunning ease, and since then the subvariants have arrived in rapid succession, starting with BA.2 and BA.2.12.1 in the spring, and now BA.5 and its nearly identical relative BA.4.

Vaccines are based on the original strain of the virus that emerged in Wuhan, China in late 2019. The Food and Drug Administration has asked vaccine makers to come up with new formulas that target BA.5 and BA.4. Those boosters could be ready by March.

But there is no guarantee that these latest subvariants will still be dominant four or five months from now. The virus is not only evolving, it’s doing so with remarkable speed. The virus may continually outrace the vaccines.

“I worry that by the time we have a vaccine for BA.5 we’ll have a BA.6 or a BA.7. This virus keeps outsmarting us,” Al-Aly said.

“We are in a very difficult position with regard to the choice of vaccine for the fall because we’re dealing with a notoriously moving target,” Anthony Fauci, President Joe Biden’s top adviser for the pandemic, said in June, a few days before he, too, announced that he was sick with the virus.

Already there’s another Omicron subvariant that has caught the attention of virologists: BA.2.75. First seen last month in India, it has been identified in a smattering of other countries, including the United States. But it’s too soon to know whether it will overtake BA.5 as the dominant variant.

There is no evidence that the new forms of the virus result in different symptoms or severity of disease. Omicron and its many offshoots – including BA.5 – typically replicate higher in the respiratory tract than earlier forms of the virus. That is one theory for why Omicron has seemed less likely to cause severe illness.

It’s also unclear if these new variants will alter the risk of a person contracting the long-duration symptoms generally known as “long COVID”. The percentage of people with severely debilitating symptoms is likely between 1 and 5 per cent – amounting to millions of people in the US, according to Harlan Krumholz, a Yale University professor of medicine.

His colleague, Akiko Iwasaki, a professor of immunology and expert on long COVID, said in an email that she believes the world is not sufficiently vigilant about the disease anymore. She is often the only person masking in a crowd, she said.

“I understand the pandemic fatigue, but the virus is not done with us,” she said. “I fear that the current human behaviour is leading to more people getting infected and acquiring long COVID. I fear that this situation can lead to a large number of people with disability and chronic health problems in the future.”

The precocious nature of the virus has made infectious-disease experts wary of predicting the next phase of the pandemic. Topol warns that a new batch of variants could come out of the blue, the same way Omicron emerged unexpectedly last November with a collection of mutations already packaged together. Omicron’s precise origin is unknown, but a leading theory is that it evolved in an immunocompromised patient with a persistent infection.

“Inevitably we could see a new Greek letter family like Omicron,” Topol said. “There’s still room for this virus to evolve. It has evolved in an accelerated way for months now. So we should count on it.”

‘Untrustworthy’: US bans Chinese technology from Huawei, others

Ukraine doctors perform heart surgery on child in the dark